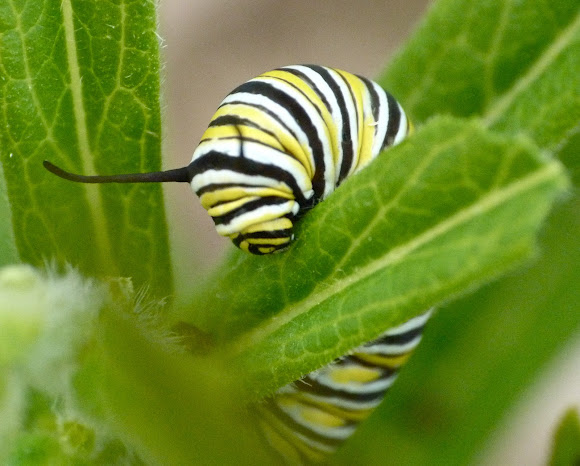 The Monarch’s wingspan ranges from 3½–4 inches. The upper side of the wings is tawny-orange, the veins and margins are black, and in the margins are two series of small white spots. The fore wings also have a few orange spots near the tip. The underside is similar but the tip of the fore wing and hind wing are yellow-brown instead of tawny-orange and the white spots are larger. The male has a black patch of androconial scales responsible for dispersing pheromones on the hind wings, and the black veins on its wing are narrower than the female’s. The male is also slightly larger.

wow, i had never seen this stage. In mexican forests you often see the adults. Lovely spotting!

Thanks Hayden! How lovely to watch the whole life cycle! I've brought a couple of cecropia moth cocoons indoors & I'm hoping that they both eclose, & if I'm lucky around the same time & be a male & a female!

Beautiful picture! I raise these during the summer, along with many other butterflies. Right now I'm raising Red Admiral caterpillars.

Jacob, we didn't see any caterpillars last spring (nothing for them to eat then!) so I'm not sure how early we usually get them here. It has been a very mild winter & an early spring, & the butterfly weeds we planted last fall are covered in them so we should get a bumper crop of Monarch butterflies this year!

Amazing these are out in TN now, they don't come around here until August, or sometimes early September!!

Beautiful shots, Karen! I grew up with these all over in MN, but they are NOT in CO! (or maybe I just haven't looked!) ;-)