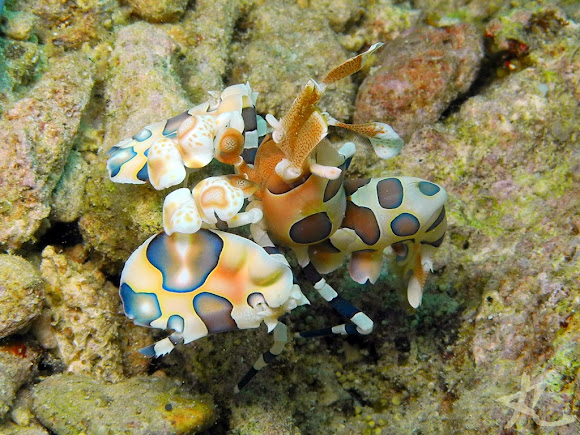 These salt-water shrimp are wonderfully attractive and are difficult to make out as shrimp due to their unusual shape and markings. They feed on starfish, including the crown-of-thorns sea star. This species is considered to be the only member of its genus, but some scientists maintain two classifications: H. picta for those found in Central and East Pacific, and H. elegans for those in the Indian Ocean and West Pacific. The difference between these two species is mainly in the coloration of their spots.

Hymenocera are found at coral reefs in the tropical waters of the Indian and Pacific oceans. They live in pairs and mate for life.

These brilliant creatures are residents of Dayang Beach -- a favorite dive site among diver-photographers in Davao. I think, maybe, my previous spotting (http://www.projectnoah.org/spottings/847...) is of the same pair. The last picture in this series shows the two with their favorite diet, a blue sea star.

Thanks, Mayra and Eulalia! (better late than never, yeah? hehehe)

Thanks, harsuame, and to all who've favorited these adorable shrimps!

Uauuu... fantastic! Nature will allways surprise us with its amazing forms of life! So beautifull and exotic!