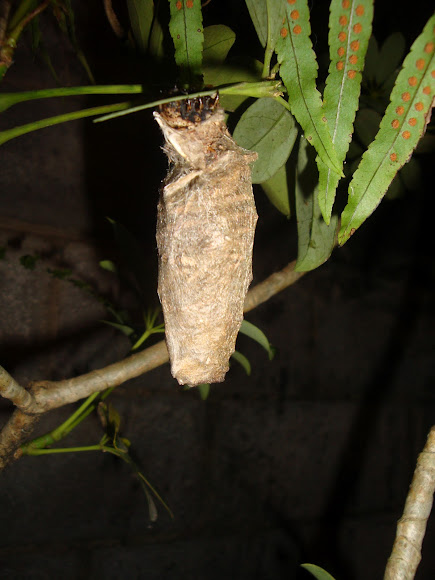 The Psychidae (bagworm moths, also simply bagworms or bagmoths) are a family of the Lepidoptera (butterflies and moths). The bagworm family is fairly small, with about 600 species described. The caterpillar larvae of the Psychidae construct cases out of silk and environmental materials such as sand, soil, lichen, or plant materials. These cases are attached to rocks, trees or fences while resting or during their pupa stage, but are otherwise mobile. The larvae of some species eat lichen, while others prefer green leaves. In many species, the adult females lack wings and are therefore difficult to identify accurately. Case-bearer cases are usually much smaller, flimsier, and consist mainly of silk, while bagworm "bags" resemble caddisfly cases in their outward appearance – a mass of (mainly) plant detritus spun together with silk on the inside. Bagworm cases range in size from less than 1 cm to 15 cm among some tropical species. Each species makes a case particular to its species, making the case more useful to identify the species than the creature itself. Cases among the more primitive species are flat. More specialized species exhibit a greater variety of case size, shape, and composition, usually narrowing on both ends. Body markings are rare. Adult females of many bagworm species have only vestigial wings, legs, and mouthparts. The adult males of most species are strong fliers with well-developed wings and feathery antennae but survive only long enough to reproduce due to underdeveloped mouthparts that prevent them from feeding. Their wings have few of the scales characteristic of most moths, instead having a thin covering of hairs.

Most bagworms are inoffensive to humans and not at all conspicuous; some are occasional nuisance pests. However, a few species can become more serious pests, and have caused significant damage e.g. to wattle (Acacia mearnsii) in South Africa and Orange (Citrus ×sinensis) in Florida. If detected early, picking the cases from the trees while in their pupa stage is an effective way to check an infestation; otherwise, insecticides are used. One bagworm species, the Fangalabola (Deborrea malgassa) of Madagascar, is in some places encouraged to breed on wattle trees, because its pupae are collected as a protein-rich food.