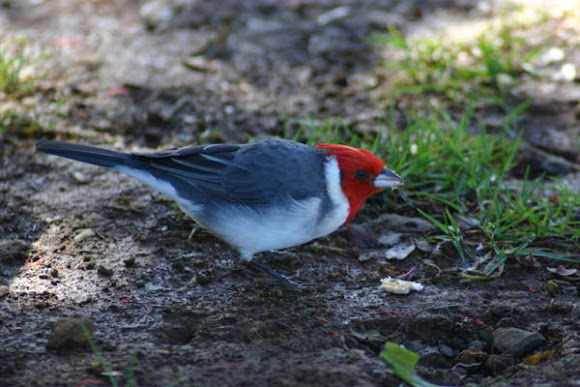 The Red-crested Cardinal (Paroaria coronata) is a bird species in the tanager family (Thraupidae). It was formerly placed in the Emberizidae, and notwithstanding its common name, it is not very closely related to the true cardinals (family Cardinalidae). It is found in northern Argentina, Bolivia, southern Brazil, Paraguay and Uruguay. Its natural habitats are subtropical or tropical dry shrubland and heavily degraded former forest. Among other regions, it is found in southern part of the Pantanal.

It has also been introduced to Hawaii and Puerto Rico. In Brazil, it has been introduced to various places outside its historical range, as in the Tietê Ecological Park in São Paulo, alongside with its very similar-looking close relative, the Red-cowled Cardinal (P. dominicana).[1] The Yellow-billed Cardinal (P. capitata) could also be easily confused with the Red-crested Cardinal; both the Red-cowled and Yellow-billed have a very short crest that is not visible except in excited birds, and in the case of the latter also a black throat, darker upperparts and a bright yellow bill. The character Pedro (spoken by will.i.am) in the 2011 animated film Rio is unmistakably a Red-crested Cardinal, with the species' tell-tale features of a long crest, grey upperparts, red throat and greyish bill.