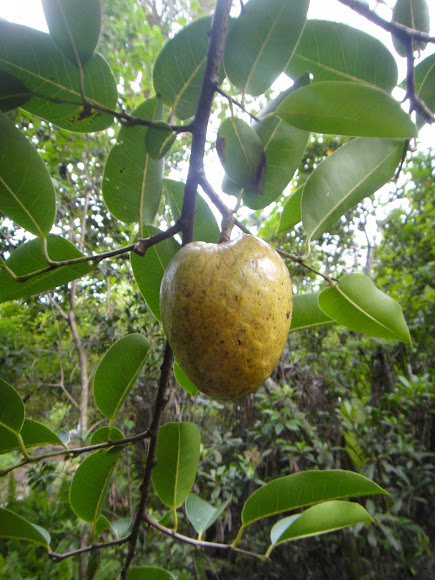 Annona glabra is a tropical fruit tree in the family Annonaceae, in the same genus as the Soursop and Cherimoya. Common names include Pond-apple, Alligator-apple, Swamp apple, Corkwood, Bobwood, and Monkey-apple. The name Alligator-apple derives from the fact that American Alligators sometimes eat the fruit.[1]

The tree is native to Florida in the United States, the Caribbean, Central and South America, and West Africa.[2] It is common in the Everglades. It grows in swamps, is tolerant of saltwater, and cannot grow in dry soil. The trees grow to a height of around 10–12 m. They have thin, gray trunks and sometimes grow in clumps. The leaves are ovate to oblong with an acute tip, 8–15 cm long and 4–6 cm broad. The fruit is oblong to spherical and apple-sized or larger, 7–15 cm long and up to 9 cm diameter, and falls when it is green or ripening yellow. It disperses by floating to new locations, and it is food for many animal species. It is edible for humans, and can be made into jam, although the taste is usually not preferable to Soursop and other related fruits. The flesh is sweet-scented and agreeable in flavor, but it has never attained general popular use.

Experiments in South Florida have been made in an attempt to use it as a superior rootstock for Sugar-apple or Soursop. While the grafts initially appear to be effective a high percentage of them typically fail over time. Soursop on Pond-apple rootstock has a dwarfing effect. It is a very troublesome invasive species in Australia. There it grows in estuaries and chokes mangrove swamps, where its seedlings carpet the banks and prevent other species from germinating or thriving. A recent study suggests that its alcoholic seed extract contains anticancer compounds that could be used pharmaceutically.[3] [edit] See also