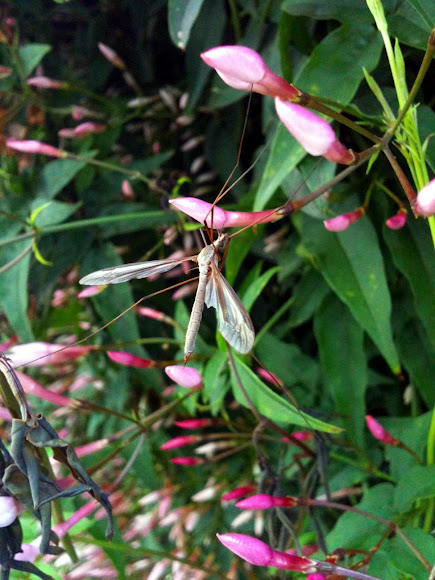 Crane flies are often mistaken for giant mosquitoes. Although crane flies and mosquitoes both belong to the insect order Diptera (true flies), they actually belong to entirely different families. Here on the West Coast, they’re referred to as “Mosquito Eaters,” in other areas, “Mosquito Hawks.” although they do not prey on mosquitoes. The soft, fragile mouth parts of crane flies make them incapable of biting. In addition, their long, clumsy legs are very fragile and break off easily. Crane flies carry no venom, and do not bite. Because they don’t eat, they can’t do anything dazzling enough to be considered a pest; except of course in the sense of annoyance. They are attracted to lights and often sit on windowsills, walls and doorways. They commonly enter houses during the evening as you enter your home Crane flies develop from large, worm-like larvae called "leather jackets" because of the brown color of their skin. The larvae of terrestrial species live in moist soil or leaf mold where they feed on decaying wood and vegetation, fungi, mosses, and the roots of herbaceous plants. In some species the larvae are completely aquatic and live in ponds and streams. When fully grown the larvae metamorphose into pupae. They are very abundant in weedy fields in spring, especially during years with high rainfall and bountiful annual grasses and herbs. Often swarms of adults appear after mowing. Like many other insects, the adults are relatively short-lived and their main purpose is to mate and perpetuate the species.

Larvae have chewing mouthparts. Crane fly larvae feed primarily on decomposing organic matter. Adults do not feed. They commonly occur in moist environments such as woodlands, streams and flood plains although some species inhabit open fields, dry rangeland and even desert environments. In compost piles, they often occur on the soil surface below the pile of decaying vegetation. Some species have been reported to feed on roots of forage crops, turf grasses and seedling field crops. Usually their presence causes little concern because they are assisting in the process of decomposition.