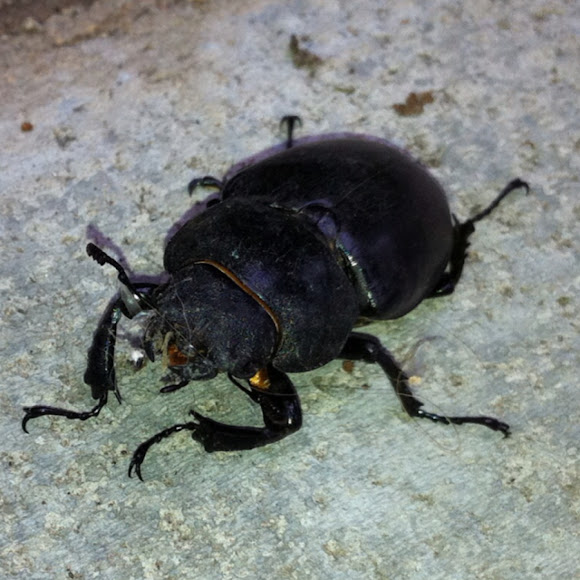 The best-known species of stag beetle in the West (family Lucanidae), and is sometimes referred to simply as the stag beetle. It lives in holes in old trees and dead trunks, in the forest as well as in groves. Forest management, in eliminating old trees and dead wood, eliminates at the same time the habitat and food of this species. Once quite common, the population of the Lucanus cervus, along with that of other species of beetles which feed on wood, is in steep decline, and is now listed as a globally threatened/declining species.

This is a female stag beetle - Lucanus cervus

I suppose it's possible it was a pet, but most scarab species are pretty short-lived as adults, not really good pet material. I think you're right that this beetle is not indigenous to the British Isles. Curious. Wonder how it got to where you found it.

Yeah well it fitted into the palm of a hand so maybe four.. There was another we found that was only half like it had been cut in half (I take it a bird) but this we found later and was alive. Was very hot summer in London. Was nuts to see it tho on the street! Was it a pet or ..? I just can't work it out

Something that large would prefer a warmer climate. It was alive?

That is big! I know there are scarabs in England, but I'm not familiar with any species THAT size there.

about 5 inches! it looked like from the scarab family definitely but what on earth is it doing in Dulwich?? London..

It's one of the scarabs. How big was it?