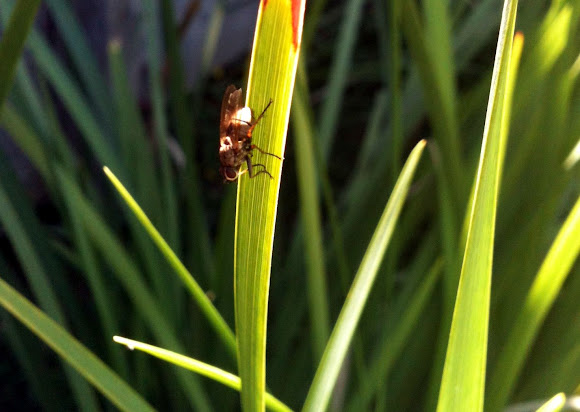 Face flies (Musca antumnalis) are particularly a problem in rural areas of northern and central California where livestock are present. The hotter, drier weather in southern California is not conducive to their development. The face fly looks virtually identical to the house fly but is somewhat larger and darker in color. Like the house fly it also has sponging mouthparts and cannot bite. However, face fly behavior is distinctive because they are attracted to the eyes, nose, and mouth of cattle and horses. Female face flies lay their tiny stalked eggs in fresh manure. The yellowish larvae feed on the manure until mature, when they crawl away to a suitable site and pupate in the soil. The life cycle is completed in about 2 weeks. Adult -- About 6 to 8 mm long, this nonbiting fly resembles its close relative, the house fly. The thorax of the face fly is gray with four dark stripes. The abdomen of the female is primarily black with an orange base and the eyes are surrounded by a silvery stripe. The abdomen of the male is orange-brown with a black base and a black dorsal stripe; the male's eyes almost touch in the center. Mouthparts of the face fly are blunt and do not protrude straight from the head in bayonet fashion as do those of the horn fly and stable fly. Egg -- The yellowish-white egg has two ridges on its dorsal side and is elongated at one end into a slender, grayish-black stalk. Each egg is about 3.0 mm long (including the stalk) and about 0.5 mm wide. Larva -- This yellowish, maggot-like larva develops through three instars and attains a length of 13 mm. The anterior spiracles have 8 to 9 finger-like openings and the posterior spiracles are D-shaped. Puparium -- Slightly smaller than the mature larva, the puparium is gray or dirty white.

Face flies feed on the secretions and sweat of cattle and horses in the summer months. Their habit of feeding around the eyes makes them successful vectors of the causative agent of pinkeye in livestock. They can become pests of humans in fall when swarms of flies enter the walls of buildings to hibernate. Then, on warm days, these hibernating flies can become active and move in large numbers to the inside of the building. Once inside the building they are attracted to light, so they are frequently found flying around windows or lights.

Musca autumnalis is considered a pest species, as it transmits eyeworm Thelazia rhodesi to cattle and horses, and Pinkeye (Infectious bovine keratoconjunctivitis) in Cattle.