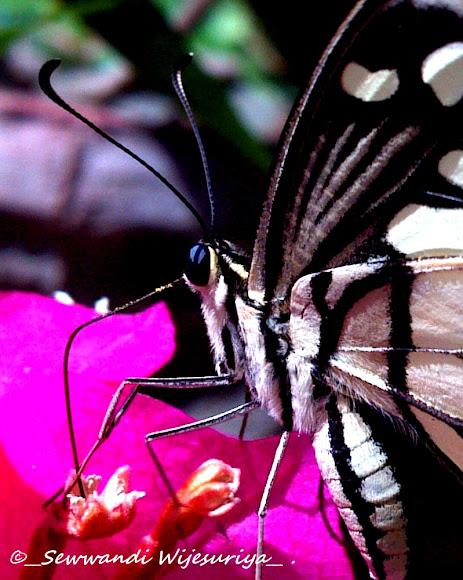 Common lime butterfly is a common and widespread butterfly.It has many other names such as lemon butterfly,lime swallowtail,citrus butterfly,etc.It gets it's name from it's host plant,which is plant of family rutaceae in Asia,but in Australia and Papua New Guinea family fabaceae.Unlike other swallotails Lime butterfly doesn't posses a prominent tail.It is a pest and an invasive species in old world that has been spread to Carribean & Central America.

Found feeding on a Bougainvillea plant.

Am not sure whether it is a newly emerged one or an old one because it's flight was very powerless and didn't even wanted to fly away when i touched him.

Thank you guys for all the likes :D :D

Ohhhhhhh ya now i get it :D thank you very much Adi...btw it wasn't shy...he was really friendly flying here & there for a very long time untill I get good photos :) its like he's dancing...wish u were there Adi..u will fall in love with it like bhagi :D

i feel like photos u captured of this "Common Lime Butterfly" tend to say this butterfly is girlish and shy :P
(But what actually bhagi meant is "girly" which s a common word to refer a friend, who s a girl) !

thank you very much for the really nice comment Adi..BTW I can't understand what you said next..does she look like girlish???

4th picture is absolutely adorable friend :) Loved it :)
Ha ha..nicely said bhagi " you captured him so great girly" :P. I read it as " how can someone capture photo in girly way" ! Well, photo designs look girly and she s shying like a girl if u observe correctly :)

Well that came out from me at the same time girl..I don't know why we always go nuts when we see a butterfly :D

Thank you verymuch Sau...I wish you were there at that time girl...

AAAAH Thanks D...Glad you noticed it :D

Bhagi thnx alot for the comment as well as for the support you gave me when am taking the pic :D

thank you Bhawnavij..ya the photo came well than i expected :)