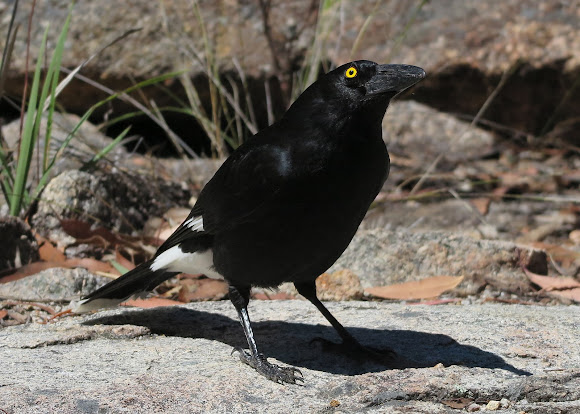 One of my favourite Australian birds, the Pied Currawong, is closely related to the Butcherbirds and Australian Magpie of the family Artamidae. It's a medium-sized black passerine bird native to eastern Australia and Lord Howe Island. One of three Currawong species in the genus Strepera. I don't know if this spotting was male or female, but it was definitely a nesting bird. I kept a safe distance, although it seemed friendly enough, but I wasn't about to push my luck. The nest was nearby (I could here the chick), and the parents can, and do, attack. They can inflict a nasty wound. Known for its melodious calls, the species' name Currawong is believed to be of indigenous origin.

This specimen was spotted in native bushland in Girraween National Park, along the Pyramid Track. Remote, lots are granite boulders, substantial undergrowth and leaf litter. Here's some park info - http://en.wikipedia.org/wiki/Girraween_N... This species prefer forests and woodlands, but has become well adapted to suburban areas also.

I don't often see these birds around Brisbane, so I was delighted to spot this fellow. Magpies are usually the go in Brisbane. And Butcherbirds. I do see more Currawongs in Sydney though, particularly during the dry spells.

Thanks, maplemoth662. These birds are real characters. I'm very fond of them.

Vinny, I would have paid to see that. I love it when nature out-wits us.

My partner was outsmarted by a Currawong in Tasmania, trying to feed it an old peach, the Currawong lead her away from a bag of nice peaches, then flew over her head grabbed the nice peaches, perched in a tree and ate them leaving her with a smelly old peach. Very funny to watch

Thanks, guys. The look of recognition in the third photo is quite amazing, and I think it shows they are smart. Anyone who knows a currawong knows they aren't dummies.