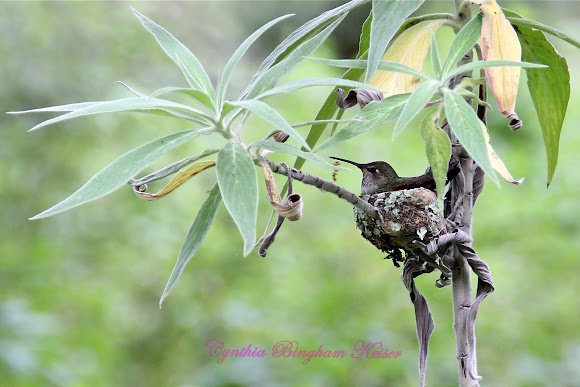 I found ANOTHER hummingbird nest! This is my fourth one this year. This beautiful girl was spotted feeding then went to her nest. She's mostly green with a gray throat other than some dark spots. There's yellow on her back which I haven't seen on Anna's before but believe this is one. Last image shows how sparse and small the plant is she's nesting on. "Anna's Hummingbird is 3.9 to 4.3 inches (10 to 11 centimeters)long. It has a bronze-green back, a pale grey chest and belly, and green flanks. Its bill is long, straight and slender. Females and juveniles have a green crown, a grey throat with some red markings, a grey chest and belly, and a dark, rounded tail with white tips on the outer feathers. The female bird builds a large nest in a shrub or tree, or in vines or on wires. The round, 3.8-to-5.1-centimetre (1.5 to 2.0 in) diameter nest is built of very small twigs, lichen and other mosses, and often lined with downy feathers or animal hair. The nest materials are bound together with spider silk or other sticky materials. They are known to nest early as mid-December and as late as June." - Wikipedia

Oak forest. Feeding on Hairy Rockrose and nesting on Pride of Madeira. I was on my knees for the shots of her in the nest. It's REALLY low! "Anna's Hummingbirds are found along the western coast of North America, from southern Canada to northern Baja California, and inland to southern Arizona. They tend to be permanent residents within their range, and are very territorial. However, birds have been spotted far outside their range in such places as southern Alaska, Saskatchewan, New York, Florida, Louisiana and Newfoundland." - Wikipedia

"The hummingbird is the only bird known to be able to fly backwards. This makes it Wildlife with Innovative Defense to be able to flee." - Wikipedia The fledgeling can be seen at: http://www.projectnoah.org/spottings/112...

I felt very lucky! I was in disbelief actually. I've only seen one hummingbird nest before PN and now 4! This girl was so pretty in this Oak forest setting.

Wow! Even seeing your pictures of this hummingbird makes me feel wonderful. You must feel so lucky to have seen this lovely lady for real :) Just beautiful!

An Anna's alright. Allen's has a green back. Great series!

Thanks Alice and I do feel lucky! You have some amazing birds where you are too!

As far as nesting low to the ground, I'm not sure. I may only be spotting low one's since they're at or just above my eye level. If there are higher one's I would only see the branch from my vantage point. They're so small!

You are lucky to be in Hummingbird territory!
Thanks for the good pictures.

Thank you James, Karen and Emma! I'm sure they'll show up and start cooperating soon. Emma, I thought about the pollen after Liam mentioned that on my previous Anna's spotting but this one is low on its back. I suppose it could have backed into a flower :)

So they prefer to build nest in lower heights?
The yellow on her back could probably be pollen.
Very cute.

Lovely! I'm jealous - no sign of them here in Tennessee yet!