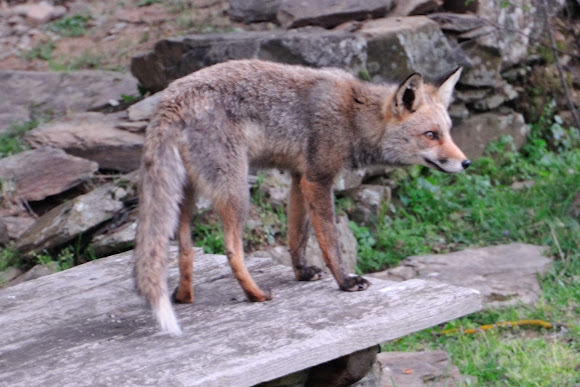 The red fox (Vulpes vulpes) is the largest of the true foxes, as well as being the most geographically spread member of the Carnivora, being distributed across the entire northern hemisphere from the Arctic Circle to North Africa, Central America and Asia. Its range has increased alongside human expansion, having been introduced to Australia. Red foxes are social animals, whose groups are led by a mated pair which monopolises breeding. The species primarily feeds on small rodents, though it may also target leporids, game birds, reptiles, invertebrates and young ungulates. Fruit and vegetable matter is also eaten on occasion.

You must be right Karen, I believe you!

Arlanda, you might change your mind if you saw what their "calling cards" look (& smell!) like after they have feasted on windfall plums! :)

Thanks Karen, I would not mind clearing up their "calling cards".

Very nice! I used to enjoy watching the red foxes in my English garden - though clearing up their "calling cards" was not so much fun!