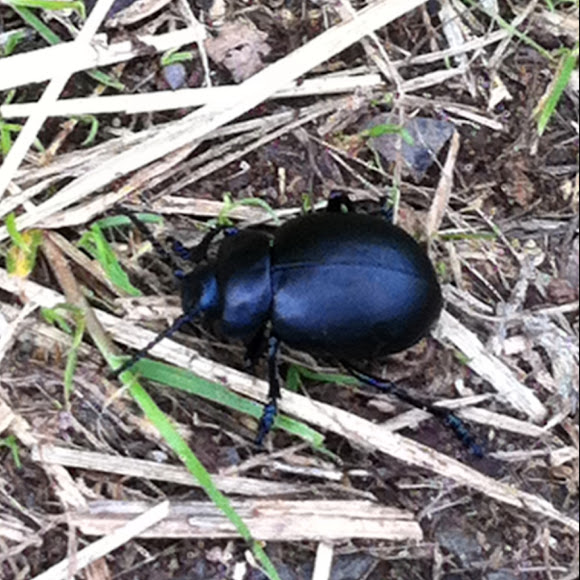 A beetle walking alongside a coastal pathway

Thank you those who helped me re-identify the beetle. I didn't know what species it truly was and it turns out it was a species I had never even heard of. At least I won't make a similar mistake in the future now I know what this beetle is.

Yes, I thought of T. tenebricosa also, that is the most common species over here, and it is much larger than T. goettingensis. Only, tenebricosa is black and not shiny, which made me hesitate. Now, that bluish hue could only be the light in the photo... Not sure, would need more info.

In spite of its tenebrionid look, I think this is a chrysomelid beetle in the Timarcha genus. Possibly Timarcha goettingensis, because of its shiny blue colour, but that is a small species (8-13 mm). You did not indicate the size?
Check out this link: http://fr.wikipedia.org/wiki/Timarcha

A very well-rounded guy. Are you sure about dung beetle?