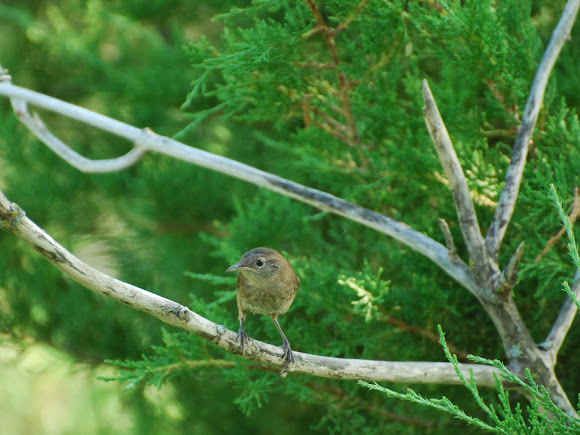 Beige, buff, black, brown, gray. Male and female birds look alike with a beige or grayish head and back. A thin white eye ring and faint eyebrow may be visible. The chest and upper abdomen are pale gray, while the lower abdomen, tail and rump are darker brown with narrow black bars. The eyes are dark and the legs gray.

common birds in forests, parks and backyards throughout the continental United States and southern Canada in the summer. In winter, these birds migrate to the southeastern United States as well as southern Texas, New Mexico and Arizona. Populations can be found year round in southern California, southern Mexico and South America.

Not sure but I believe this to be a young Wren of some kind (House, Winter, Sedge or Marsh Wren). Found in Fergus Falls off the Central Lake Biking Trail in a small tree growing next to the tared path. The path has two sloughs or small ponds on either side but there's also farm pasture, woods and meadows nearby.

Liam-Thank you for your assistance IDing this little fellow!!