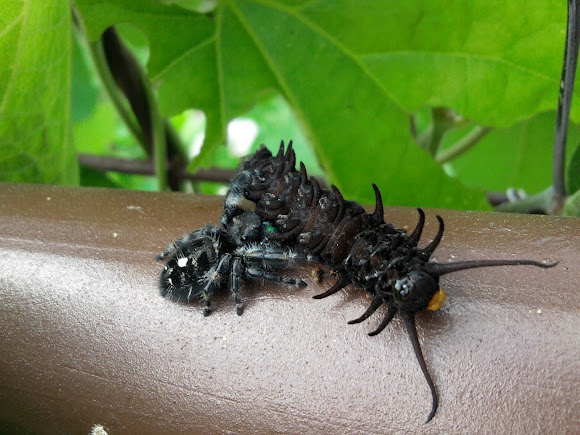 Phidippus audax is a common jumping spider of North America. It is commonly referred to as the daring jumping spider, or bold jumping spider. The average size of adults ranges from roughly 13 to 20 mm in length. These spiders are typically black with a pattern of spots and striped on their abdomen and legs. Often these spots are orange-tinted in juveniles, turning white as the spider matures. The daring jumping spider belongs to the genus Phidippus, a group of jumping spiders easily identified both by their relatively large size and their iridescent chelicerae. In the case of P. audax, these chelicerae are a bright, metallic green or blue. These spiders have been known to jump up to 50 times their own body length by suddenly increasing the blood pressure in the third or fourth pair of legs., and the male may jump away during mating if the female approaches too quickly. Like other jumping spiders, due to their large, forward-facing eyes, they have very good stereoscopic vision. This aids them when stalking prey, and allows some visual communication with others of their species, such as courting 'dances'. (information from Wikipedia)

This spotting took place at Oxley Nature Center in Tulsa, OK, and the spider is devouring a pipevine swallowtail caterpillar. I snapped the first photo with my cell phone camera and that's why it looks different from the others in the series.

not only bold but ambitious too I'd say !

That's a huge meal. Good find and I didn't know about hunters. Thanks karen.

This would be a good one to add to the Hunters mission!

Thanks! I would have shot more but it was late in the day, I was tired, and my flash batteries were fading, causing a long delay between shots. I was content to see the hunt take place and capture the shots that I did. :-)

Nice one, Goody. It is incredible how these critters are strong!