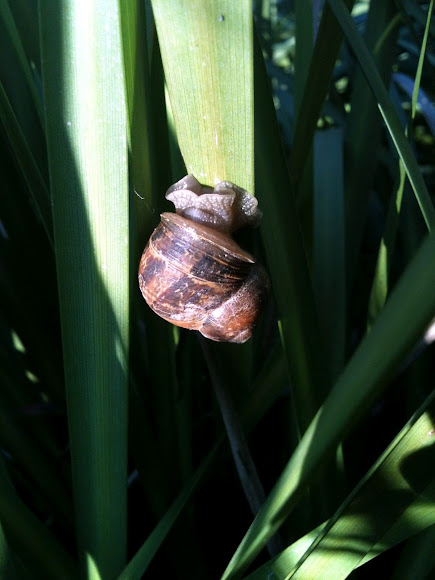 Brown garden snail, Cornu aspersa (formerly Helix aspersa, Cantareus aspersus, and Cryptomphalus aspersus) is a member of the family Helicidae. This snail species originates from Britain, western Europe, and along borders of the Mediterranean and Black Seas. There have been introductions of this species into Argentina, the Atlantic Islands, Australia, Chile, Haiti, Mexico, New Zealand, and South Africa. In the United States, it is reported from California north to British Columbia, Canada, in most southeastern states and along the east coast north to New Jersey. This snail is reported to cost the state of California 7-10 million dollars every year. The Brown Garden Snail was brought from Europe as a food delicacy and they have been a pest in California for more than 100 years.

Land snails occupy a variety of terrestrial habitats, including gardens, scrub, bush, rainforest and even desert. While native molluscs are still present in large numbers, the majority of molluscs species present in Victoria are introduced species. The distributions of most of the native snails are restricted to areas with native vegetation. In urban areas, the introduced species such as Cantareus aspersa (Common Garden Snail) are most frequently encountered.

Preparing snails to eat..... What you have to do first with snails is purify them, because — well, for all you know, they might have just eaten some snail bait. They don’t put arsenic in snail bait anymore, but a lot of snail-bait products do contain insecticide, and carbaryl is not something you want to eat. Typically, the purification ritual lasts for two weeks. You purge snails by feeding them greens or corn meal — something like that. Just feed them corn meal, and give them water and change their food almost daily until their systems are clean. Don’t use a cardboard box, because snails can chew through cardboard with their teeth, their little rasping mouthparts. A friend of mine keeps his snails in an old bathtub. A big plastic recycling bin will work just as well. Remember to keep it covered, or they will escape. After your snails are purified, how do you cook them? You boil them first for 10-15 minutes. This forms an incredibly disgusting scum that you must keep cleaning off and cleaning off and cleaning off the top until it’s clear — you might even need to change the water. When the scum is gone, you know the snails are okay — they’re done. After the snails die, most of them separate from their shells, but some you need to pull out — that’s easy. When they’re all removed, you just chop up the snails, dice them up fine and mix them with olive oil, garlic, butter and parsley. Mix them all together, stuff everything back into the snail shells and then bake them until they’re hot and bubbly. If you don’t want to deal with the difficulty of stuffing shells and eating them out of shells, you can just cook them inside mushroom caps or in baking dishes that have little depressions. Italians also sometimes use snails in pasta sauce.

I've moved this snail from the Arthropod category to the Other category for you. Arthropods have an exoskelaton and jointed limbs in at least one phase of their life. Think dragonfly, bee, crab, and ant.