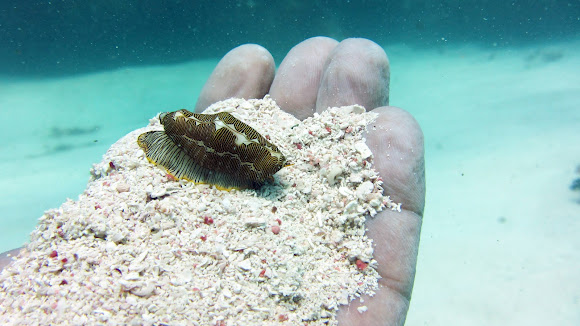 Photo take at -40 ft near to a coral reef in the middle of the sand bottom fighting in the sand to get to the reef. A real Beauty very rare to find do to the Aquarium fans do to its beauty is in the Red least of endanger species. A species of sea snail, a marine gastropod mollusk, mantle, which, usually covers the shell completely. Often covered by debris that are used to protect against high luminosity.Shell white to creamy with some yellow marks. Mantle covered with white spots similar to fingerprints, black curve lines that become circular spots (with black lines in the periphery as well as various indoor) and golden yellow space between the lines. About 2cm to 2.5 cm long.

Found more common on the coral reef from Florida the Gulf of México all the Caribbean Sea, Central America to Brazil. Usually in association with gorgonians in all types of habitat at depths between 1.7 to 14 meters.

After the photo section i thanks Poseidon and give it a hand and place it on the reef near to a coral they love a Sea Fan.

I love it! Wish I could see them for myself!

Hey Gerardo, I hope you'll submit this to the Mollusca mission as well. :)

Thanks Gemma just the right name!