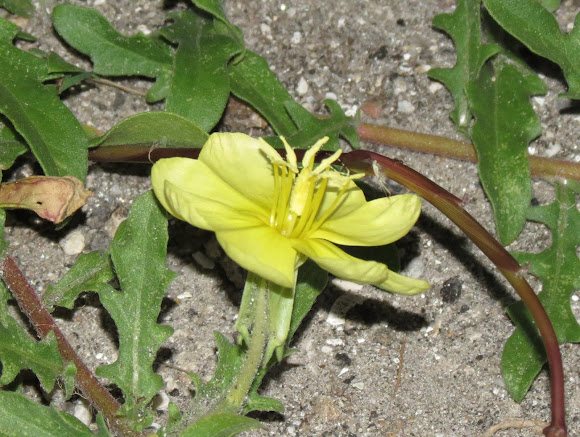 Common names include evening-primrose, suncups, and sundrops. The species vary in size from small alpine plants 10 cm tall (e.g. O. acaulis from Chile), to vigorous lowland species growing to 3 m (e.g. O. stubbei from Mexico). The leaves form a basal rosette at ground level and spiral up to the flowering stems; the leaves are dentate or deeply lobed (pinnatifid). The flowers of many species open within less than a minute in the evening, hence the name "evening-primrose", and are yellow in most species but white, purple, pink or red in a few. Most native desert species are white. The fragrant tufted evening-primrose Oenothera caespitosa, a Southwestern species, first blooms white but turns pink or light magenta. One of the most distinctive features of the flower is the stigma with four branches, forming an X shape.Pollination is by Lepidoptera (moths) and bees; like many members of the Onagraceae, however, the pollen grains are loosely held together by viscin threads (see photo below), meaning that only bees that are morphologically specialized to gather this pollen can effectively pollinate the flowers (it cannot be held effectively in a typical bee scopa). Furthermore, the flowers are open at a time when most bee species are inactive, so the bees which visit Oenothera are also compelled to be vespertine temporal specialists. The seeds ripen from late summer to fall. Oenothera species are used as food plants by the larvae of some Lepidoptera species including Schinia felicitata and Schinia florida, both of which feed exclusively on the genus, the former exclusively on O. deltoides.

In the wild, evening-primrose acts as a primary colonizer, quickly appearing wherever a patch of bare ground may be found. It tends to germinate in disturbed soil, meaning that it tends to be found in poorer environments such as dunes, roadsides, railway embankments and wasteland. It often occurs as a casual, eventually being out-competed by other species.