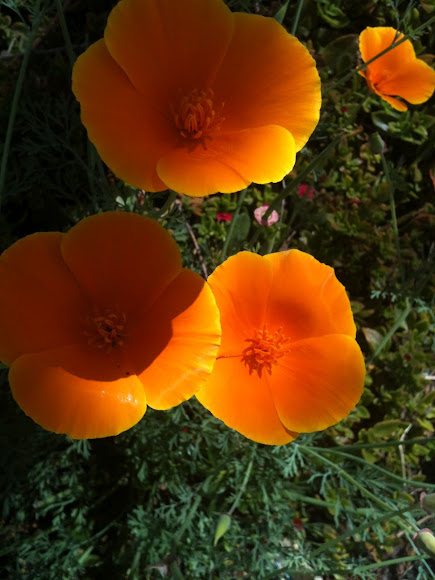 An upright, compact annual or tender perennial native to California and the southwestern United States. Extremely drought tolerant, ideal for arid environments. The brilliant orange, cup-shaped flowers, are 2-4 inches in diameter, borne individually on long stalks. The California poppy has bluish-green parsley-shaped leaves, which mostly sprout basally, from the base of the plant. Prefers full sun in light to sandy soils. Remarkably uniform and neat in appearance. A popular variety to press. Not hardy below 20F. California Indians cherished the poppy as both a source of food and for oil extracted from the plant. Its botanical name, Eschsholtzia californica, was given by Adelbert Von Chamisso, a naturalist and member of the Prussian Academy of Sciences, who dropped anchor in San Francisco in 1816 in a bay surrounded by hills of the golden flowers. Also sometimes known as the flame flower, la amapola, and copa de oro (cup of gold), the poppy grows wild throughout California. It became the state flower in 1903. Every year April 6 is California Poppy Day, and Governor Wilson proclaimed May 13-18, 1996, Poppy Week.

California Poppy is found in open and grassy areas, in lower altitudes, extending from the Columbia River valley in Washington state southwards into the Baja peninsula of California, westward to the Pacific ocean, and in the south, eastward into New Mexico and Texas. In its southern range California Poppy can interbreed with E. mexicana. Papaver somniferum in native to Western Asia; Meconopsis to the Tibetan plateau (excluding Meconopsis cambrica, the ‘Welsh Poppy’); many Argemone species are found throughout North America, some of which are endangered (e.g. A. pleiacanth). Individual populations have adapted to their particular local conditions. In the native range, where it is dry or there are cold hard winters, this species is an annual (living only one year and then reseeding). Outside of these areas, plants develop a tap root, for energy storage, and live beyond a year. Along the coast many populations are short and grow in tight mounds, while populations of the inland valleys are taller and scattered. In both subspecies, there are occasional white, cream, pink, or red flowers.

People use the parts that grow above the ground for medicine. California poppy is used for trouble sleeping (insomnia), aches, nervous agitation, bed-wetting in children, and diseases of the bladder and liver. It is also used to promote relaxation. In combination with other herbs, California poppy is used for depression, long-term mental and physical tiredness (neurasthenia), nerve pain, various psychiatric conditions, blood vessel problems, sensitivity to weather changes, and sedation. An herb combination including California poppy is also used for sleep and mood disturbance associated with strong, warm wind in the Alps (foehn illness). Desert Indian tribes are reported to have eaten the vegetative leaves, applied the pollen as a cosmetic, used a decoction to kill lice, and used it medicinally as a mild pain killer to treat toothache and insomnia California poppy contains chemicals that might cause relaxation and sleepiness.

I see you found it - Wonderful!

Oh thanks...I didn't know there was a medicinal mission. Guess I will have to do some looking XD

This should be put in the Medicnal Mission