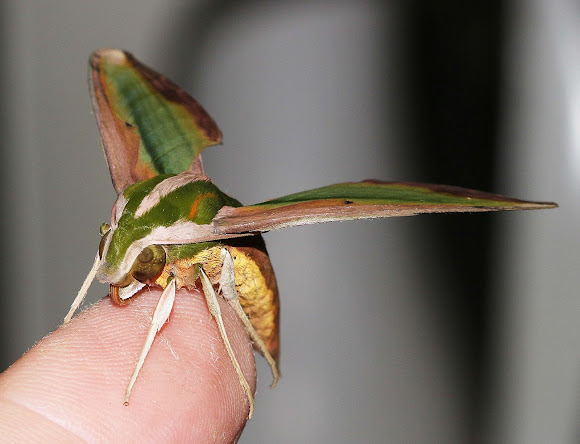 Sphingidae; Macroglossinae; Pergesa acteus (Cramer,1779). "The Sphingidae are a family of moths, commonly known as hawk moths, sphinx moths, and hornworms. They are moderate to large in size and are distinguished among moths for their rapid, sustained flying ability. Their narrow wings and streamlined abdomens are adaptations for rapid flight." Philepidoptera.

The Pergesa acteus shown here was a captive reared specimen and the reason it is sitting on my finger tip is that I have found this to be the safest way to release these moths, when they are able and ready to fly. The area immediately surrounding our house is the natural habitat of this and many other species of Hawk Moth. There is a very diverse range of plants throughout this area, but the important one in this case is Corazon de Maria (Caladium bicolor).It is abundant here and happens to be the favourite host plant of P. acteus.

I am aware that many nature lovers do not approve of captive rearing and captive breeding because, no matter how you try to explain it, the cold hard fact is that it is interfering with nature. But I have been doing it for the following reason. When I retired here 20 years ago in this Barrio (village), This was a very quiet rural environment where not much happened other than farming and fishing. But as the economy here has rapidly improved, everything has been moving forward at a fast pace. In recent years, all the grass verges get trimmed regularly. Now it looks like suburbia and that's just fine. But when the trimming takes place, all of the Corazon de Maria gets chopped down and the Hawk Moth population plummets. So I decided to go out and collect Hawk Moth eggs and larvae before each grass cutting session. Then I look after them until I end up releasing specimens like the one above. I think it has helped the moths to some small extent and I have learned a lot.

Hi Mark, thank you for your comment on my P. acteus. Yes I agree it is a beautiful species. John B.