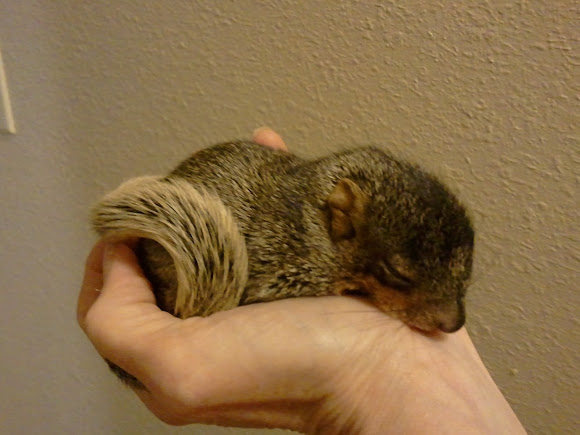 I found this little guy after the weather changed. His body temp had dropped and the mother abandoned him despite my efforts to warm him and place him in same area to reunite them. I've never cared for a baby squirrel in San Antonio before and didn't know who to call. Yep, every three hours of feeding and wiping his little booty. I ended up finding the Audubon Society and was directed to a "half-way house". He was put with other squirrels his age and eventually released with his little troop which was for the best. I wanted to keep him but I could just see a Tweety Bird situation with my cats and dogs; besides, it's illegal here.

Typically a mother will come back for her babies unless their body temperature drops. I tried this but the temperature dropped so much, I couldn't leave him out for long.

Thanks ZooNerd! He was so cute! I always think about him and when there's a cold front here, I'll go out to see if any babies have been dropped.

Hey Dixie ZooNerd here I just saw this photo I absolutely love it. I just melted it is so cute. I love fox squirrels I thought they were gray squirrels but n of the people I am following helped Identify mine. I love baby animals.

Thank you DrNamgyalT.Sherpa! I thought so too.

Wow, what a spotting! Great Job!

So cute :) :) Loved it so much :)
Thank you for sharing such a supercute spotting :)

And so is this

Thanks Koelzow. Sometimes I would carry him around in my sweatshirt front pouch while getting his feeding supplies ready.

Thank you so much ChiefRedEarth, Antonio, Daniele, and Dilan! He sure was a cutie!

So cute Dixie,great happy ending story,congrats on the SOTD and thanks for sharing

Congrats Dixie! I loved this spotting, especially with the happy ending :-)

Oh so sweet! Beautiful heart-warming story, and congrats for SOTD.

Yes, I join in the congratulations! it is a very nice story!

Congratulations! I think all of us are very happy that you earned the honor :-)

Congratulations Dixie on your SOTD

Thank you Marvin, EnvUnlimited, Gilma, and Lauren! I REALLY appreciate the comments and favoring.