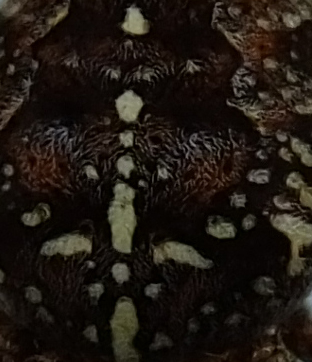 Recorded from Newfoundland and Nova Scotia to British Columbia and south to northern California, Michigan, Ohio, Pennsylvania, New York and Rhode Island, the Cross Orb-weaver is a European immigrant that has settled into the Northern parts of North America. The cross spider spins a large complex orb-web - up to 40 cm in diameter - used to capture insect prey. The webs are built by the large females. Orb Spiders build a new web daily and are s aid to eat their webs each night along with many of the small insects stuck to it. They have been observed eating the web within a couple of minutes. A new web is then spun in the morning.

Near front walkway of a house