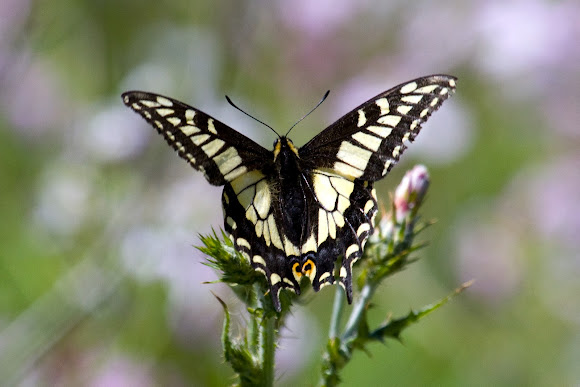 The Anise Swallowtail, Papilio zelicaon, is a common swallowtail butterfly of western North America. Both the upper and lower sides of its wings are black, but the upper wing has a broad yellow stripe across it, which gives the butterfly an overall yellow appearance. There are striking blue spots on the rear edge of the rear wing, and the characteristic tails of the swallowtails. Its wingspan is 7–9 cm. Its body is somewhat shorter than the rather similar Western Tiger Swallowtail, with which its range overlaps; it also lacks the black stripes, converging toward the tail, of the latter. There is a somewhat darker subspecies, Papilio zelicaon nitra, which is rare throughout the range, though somewhat more often found at lower elevations.