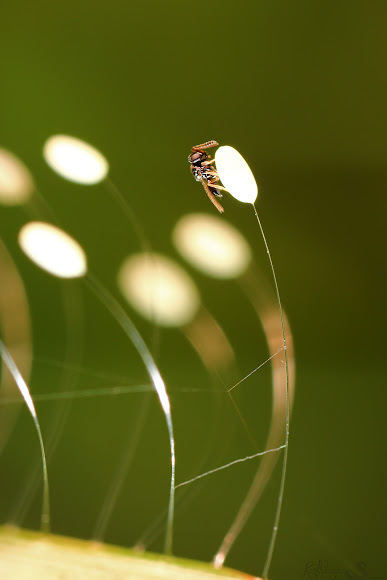 Parasitic wasp on the lacewing egg.

"The hymenopteran family Scelionidae is a very large cosmopolitan group (over 3000 described species in some 160 genera) of exclusively parasitoid wasps, mostly small (0.5–10 mm), often black, often highly sculptured, with (typically) elbowed antennae that have a 9- or 10-segmented flagellum. Nowadays, it is considered to be a subfamily of the Platygastridae.
They are generally idiobionts, attacking the eggs of many different types of insects, spiders, butterflies (the hackberry emperor, for example) and many are important in biological control. Several genera are wingless, and a few attack aquatic insect eggs underwater." - Wikipedia

Such a small wasp that it is hard to tell, but I am thinking it is in the family Scelionidae. There are scelionids that are known to attack the stalked lacewing eggs.

Great shot Karthi.. that is one tiny wasp!