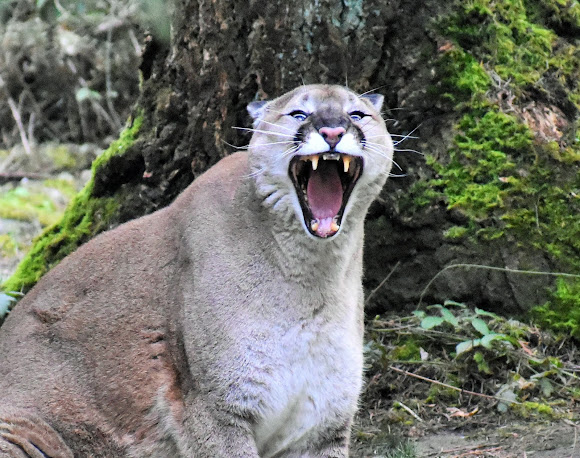 Cougars are the fourth largest cat. They have a round head and erect ears. Their light brown color allows them to blend in to most backgrounds and ambush their prey - their specialty. They attack at the neck of their prey with their strong jaws - often breaking their preys neck. It can certainly run down its prey if it has to. The cougar's top running speed ranges between 64 and 80 km/h (40 and 50 mph), but is best adapted for short, powerful sprints rather than long chases. It is adept at climbing, which allows it to evade canine competitors. Although it is not strongly associated with water, it can swim.

Spotted at the Northwest Trek Wildlife Park. The cougar is found in most American habitat types though its range has been reduced to western North America, portions of Mexico, Central America and most of South America.

Thank you maplemoth and Christine.

Incredibly cool shot. The look on its face makes me think of someone opening wide at the dentist, knowing that they haven't brushed properly. Those top front teeth are gnarly.