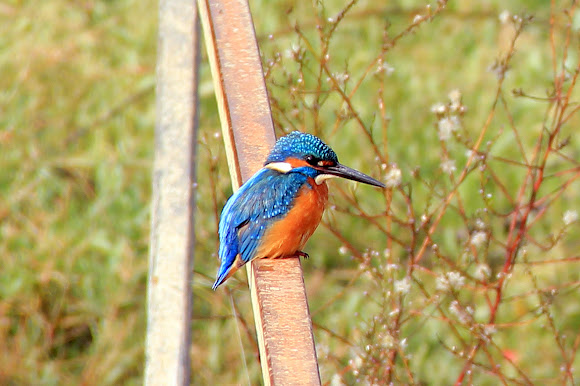 This species has the typical short-tailed, dumpy-bodied large-headed and long-billed kingfisher shape. The adult male of the western European subspecies, A. a. ispida has green-blue upperparts with pale azure-blue back and rump, a rufous patch by the bill base, and a rufous ear-patch. It has a green-blue neck stripe, white neck blaze and throat, rufous underparts, and a black bill with some red at the base. The legs and feet are bright red. It is about 16 centimetres (6.3 in) long with a wingspan of 25 cm (9.8 in), and weighs 34–46 grams (1.2–1.6 oz). (https://en.wikipedia.org/wiki/Common_kin...)

The common kingfisher is widely distributed over Europe, Asia, and North Africa, mainly south of 60°N. It is a common breeding species over much of its vast Eurasian range, but in North Africa it is mainly a winter visitor, although it is a scarce breeding resident in coastal Morocco and Tunisia. In temperate regions, this kingfisher inhabits clear, slow-flowing streams and rivers, and lakes with well-vegetated banks. It frequents scrubs and bushes with overhanging branches close to shallow open water in which it hunts. In winter it is more coastal, often feeding in estuaries or harbours and along rocky seashores. Tropical populations are found by slow-flowing rivers, in mangrove creeks and in swamps. (https://en.wikipedia.org/wiki/Common_kin...)

Spotted at the Seven Mills on the Yarkon River in Yarkon Park, Tel Aviv, Israel.