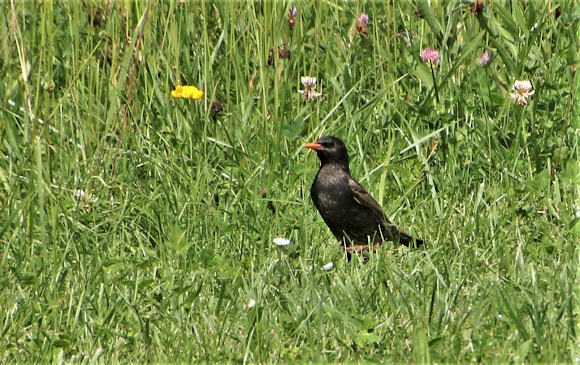 European or Common Starling is a very common european resident bird. Starling is about 20 cm long, predominantly dark blue to blackish bird; with a blue metallic sheen in its feathers; feathers are also speckled white. The legs are orange-pink and the bill is yellow (it becomes dark brown or black in winter). Young birds (not portrayed here) have browner plumage than the adults

Very common european bird, seen in diverse habitats - thrives in woodland areas, urban setting and agricultural areas. Here seen in rather rural or semi-urban setting: in a very calm small rural town not too far away from Geneva, and in its big wooded + meadow park. The town and the park are close to slopes of Jura and coasts of lake Leman (Geneva).

The European Starling flocks in large numbers after breeding, and flocks are often filmed producing spectacular figures just before roosting.