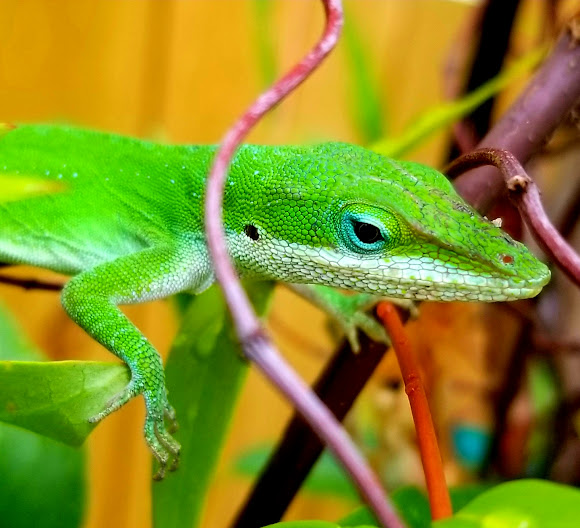 This lizard was found sitting in some green plants while trying to stay hidden with it's green scales.This one was about 1.5 years old has a length of 6 inches.These can change colors depending on where they are sitting, like if they are sitting on tree bark they will be brown.The way to tell it apart from other Anoles is the teal around the eyes.The species also has a bright pink and red dewlap when scared or while mating.The underside is a pearl white.

Semi-urban, Fort Worth, Texas It was sitting in some green plants making it blend in.

Probably a female because of the huge size of the Anole.This species is native to North America, where it is found mainly in the subtropical southeastern parts of the continent. Anoles are most abundant on the Atlantic Coastal Plains in North Carolina, South Carolina, Georgia and Florida, and on the Gulf Coast in Alabama, Mississippi, Louisiana, and Texas, where they extend inland as far as Texas Hill Country. In the Carolinas they are found in the coastal plains and southern piedmont of North Carolina, but throughout South Carolina,[8] while in Georgia they are widespread except in the Blue Ridge region.In other parts of its geographic range, A. carolinensis is considered an introduced species. It has become abundant in Hawaii since it was discovered in 1950. It also has been introduced and has flourished in the Ogasawara Islands of Japan, and in Cuba, the Bahamas, and Guam. In Guam, however, densities have been impacted drastically by predators, such as introduced brown tree snakes (Boiga irregularis).