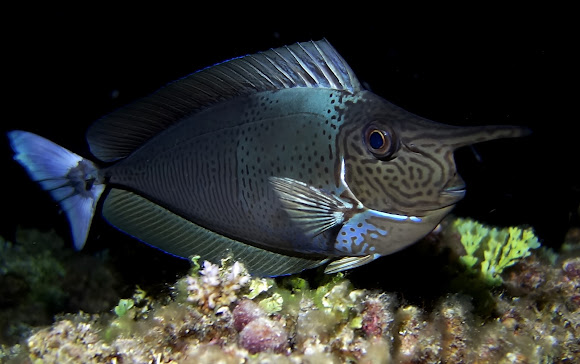 The short-nosed unicornfish dwells in rocky shore and reef habitats, and prefers water temperatures ranging from 22.4 to 29° Celsius. This species is listed as "least concern" on the IUCN Red List of Threatened Species, and there are no observed declines as a result of commercial or recreational fishing. Juveniles feed on benthic algae, and adults feed on algae and zooplankton

Gorgeous!!
Congratulations on Pic of the Day Collection for Dec 5th on The Great Nature Project.
http://greatnature.education.nationalgeo...

Thanks for agreeing to share your photo! Your photo will be highlighted on December 5th. Afterwards, you’ll be able to see your photo for about a month in the Pic of the Day Collection (http://greatnature.education.nationalgeo...). Thanks again for contributing to The Great Nature Project