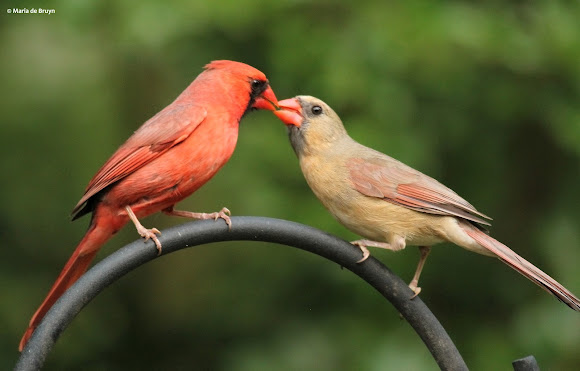 The male behaves territorially, marking out his territory with song. During courtship, the male feeds seed to the female beak-to-beak. A clutch of three to four eggs is laid, and two to four clutches are produced each year.

They can be found in southern Canada, through the eastern United States from Maine to Texas and south through Mexico. It is found in woodlands, gardens, shrublands, and swamps. Seen in my yard.

Thanks for the nice comments! Unfortunately, this part of North Carolina doesn't fall within your mission radius, LandmarkExpert, but thanks for the invitation.

would you consider adding this to the backyard birds of northeastern usa mission?
https://www.projectnoah.org/missions/194...
thank you!

This is so wonderful! WOW! Amazing! So cute!

Thanks, matimar1 - I agree with you!

Mandy, I just added this posting to your mission; thanks for asking

Adorable series! Could you please add it to "Southern Romance"? This is one of the more "romantic" animal spottings :)

Thanks, willie and Mayra!

love is in the air for many birds, very nice Maria dB

Thanks, Ashish and Satyen!

Thanks, Misako, annorion and Karen. Spring is always an especially nice time to observe the birds!

What a lovely series!

now I am ceci.Thank you for telling me that the male is feeding the female in an effort to get in her good graces.

I thought it was very sweet, too. The male is feeding the female in an effort to get in her good graces.