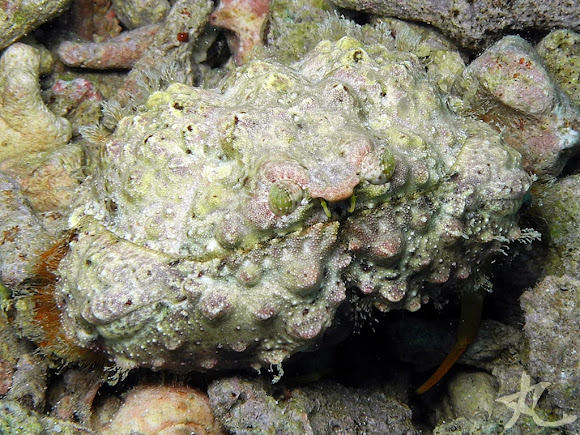 Also known as Knobby Box Crab, Warty Box Crab, Crusty Box Crab and Rough Box Crab. They feed on plankton and invertebrates, and grow to a length of about 10cm. When box crab are moved against their will, they draw up their legs under their carapace, which is grooved to fit their legs almost seamlessly. This defense mechanism does not only present a difficulty on the part of their predators to dismember them, but it also affords them an excellent camouflage. Another defense mechanism this crab possesses is its speed!

They inhabit sandy areas, and are found at depths of 1 to 20m. Widespread in the Indo-Pacific and Tropical Atlantic regions.

First time for me to see this kind of crab. Spotted it only because it moved! If it hadn't, I wouldn't have seen it at all. When it's all boxed up -- presumably that's its way of escaping predators -- its appendages fit neatly under its shell that it looks just like a stone or a dead piece of coral (see the last picture). I played with it for a couple minutes, but made sure not to harm it. I just wanted to take a photo of it with its arms outstretched.

Updated the info for this spotting -- I mistakenly labeled it as the Smooth Box Crab.