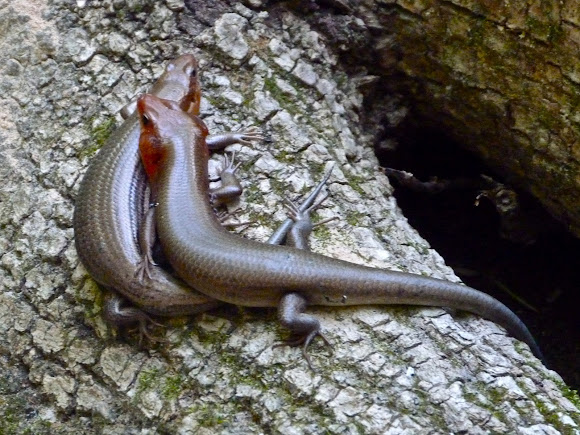 The broad-headed skink gets its name from the wide jaws, giving the head a triangular appearance. Adult males are brown or olive brown in color and have bright orange heads during the mating season in spring. Females have five light stripes running down the back and the tail, similar to the Five-lined Skink. Juveniles are dark brown or black and also striped and have blue tails. These skinks are the most arboreal of the North American Eumeces. Although they do occur in urban areas, their preferred habitat are humid forest areas with abundant leaf litter, especially oak forests. They forage on the ground, but also easily and often climb trees for shelter or sleep or searching for food. Females typically are larger than males. The larger the female, the more eggs she will lay. Males thus often try to mate with the largest female they can find, and they sometimes in engage severe fights with other males over access to a female. The female lays between 8 and 22 eggs, which she guards and protects until they hatch in June or July. The hatchlings have a total length of 6 to 8 centimeters. Adult broad-headed skinks can grow to about 13 inches in length.

I accidentally disturbed a passionate moment between this pair!

Awesome spotting. Thanks for all the info, too. Very interesting.

Hi Walter! If you want to send me an email suggesting it I will raise the idea with the team!

Hey KarenL! Do you think you could interest the PN Brain Trust in creating global mission for mating pairs of animals?

Thank you Janson! These little guys were everywhere on the trail but mostly there & gone before I could reach for my camera so it was really good to find these ones otherwise occupied!
Love your spot Neil! Photos of snakes mating are awesome, I just love the way they intertwine!

Karen - what a terrific spotting! Getting to observe and photo this kind of thing doesn't happen too often. (Same thoughts on this spotting too: http://www.projectnoah.org/spottings/616...)

Thanks Carol! I think they were enjoying a post coital cuddle & were oblivious to my presence!

It certainly is Maria!

Very nice spotting - spring is in the air!