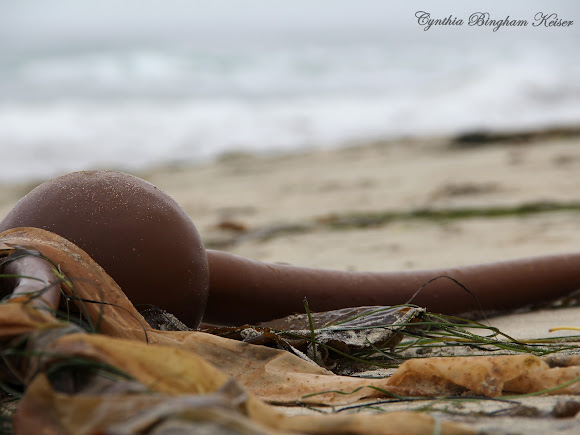 Bladder of the Giant Kelp. "M.pyrifera is the largest of all algae. M.pyrifera is one of the fastest-growing organisms on Earth. Individual algae may grow to more than 45 metres (148 ft) long at a rate of as much as 2 feet (61 cm) per day. " - Wikipedia

Washed up on the beach. "Giant kelp is common along the coast of the eastern Pacific Ocean, from Baja California north to southeast Alaska, and is also found in the southern oceans near South America, South Africa, and Australia. " - Wikipedia

"Growth occurs with lengthening of the stipe (central stalk), and splitting of the blades. At the growing tip is a single blade, at the base of which develop small gas bladders along one side. As the bladders and stipe grow, small tears develop in the attached blade. Once the tears have completed, each bladder supports a single separate blade along the stipe, with the bladders and their blades attached at irregular intervals." - Wikipedia "The genus name Macrocystis means "large bladder" " - Starthrower