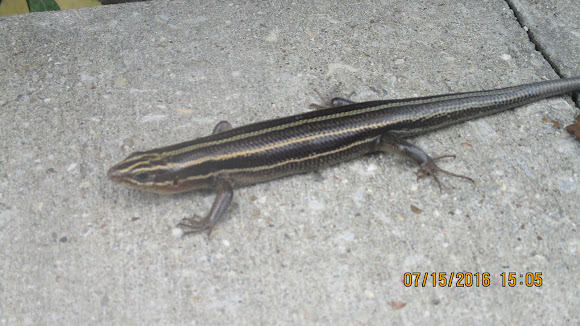 These guys are only found in the eastern most part of Texas and continue east and north as the range maps show. These little guys are out during the day. These skinks love woodsheds, damp areas, and like to bask on trees. This guy was basking in a flowerbed edging at the Frank Buck Zoo in Gainesville TX. They eat bugs and other small wildlife. They are a fast lizard. This one was a full grown adult because it lacked the blue tail used by younger lizards to keep predators away from the rest of the body. If attacked young Skinks use a tactic known as autotomy which allows for a lizard to quickly dislodge it's tail so it will distract the predator that is attacking the lizard so it can make a clean getaway without the loss of life. These lizards are so named for the five lines on their bodies. They have a nice shiny yellow and black contrast to their bodies.

Damp areas of Eastern Texas, up though Oklahoma Eastward.