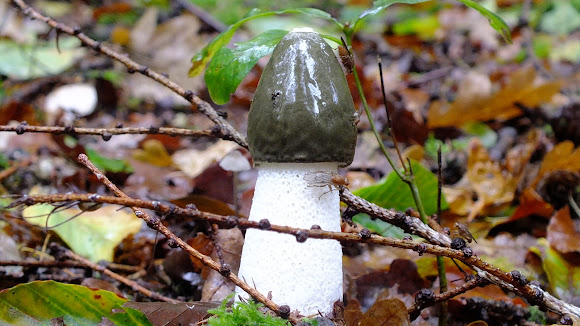 Sometimes called the witch's egg, the immature stinkhorn is whitish or pinkish, egg-shaped, and typically 4 to 6 cm by 3 to 5 cm. On the outside is a thick whitish volva, also known as the peridium, covering the olive-colored gelatinous gleba. It is the latter that contains the spores and later stinks and attracts the flies; within this layer is a green layer which will become the 'head' of the expanded fruit body; and inside this is a white structure called the receptaculum, that is hard, but has an airy structure like a sponge. The eggs become fully grown stinkhorns very rapidly, over a day or two. The mature stinkhorn is 10 to 30 cm tall and 4 to 5 cm in diameter, topped with a conical cap 2 to 4 cm high that is covered with the greenish-brown slimy gleba. In older fungi the slime is eventually removed, exposing a bare yellowish pitted and ridged surface. The rate of growth of Phallus impudicus has been measured at 10–15 cm per hour.

The stinkhorn can be found throughout much of Europe and North America, and it has also been collected in Asia and southeast Australia. In North America, it is most common west of the Mississippi River. Phallus impudicus is found in all kinds of woodland, but particularly common in coniferous forests. This saprobic fungus invariably appears near to dead tree stumps or other sources of rotting timber.