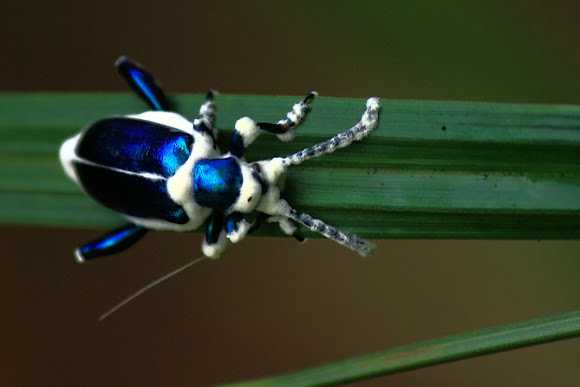 LEAF BEETLE ATTACKED BY PARASITIC FUNGUS Beauveria bassiana. LEAF BEETLE belongs to a large family of small- to medium-sized beetles. Some species are small and round, while others are longer and more angular. The antennae are fairly short. Leaf Beetles exhibit highly variable colors and patterns. The adults usually feed on leaves and flowers, while the larvae feed on leaves or roots. The adults of some species feed on pollen, as well as other parts of a plant, often causing more damage than good. (From: http://eol.org/pages/7463/details )

Chrysomelids are phytophagous and are among the most diverse and conspicuous insect families on plants. (From: http://bugguide.net/node/view/180 )

About the parasitic fungus: Global Citizen Year » Beauveria bassiana Thanks to Mark Ridgway for providing this information.

Very nice spotting, Hari. Could you please add it to the "Arthropods parasitised by fungi" mission? http://www.projectnoah.org/missions/1159...

Thank you, Martin. Is it also known as Frog legged Leaf beetle ?

Beautiful beetle! Too bad about the fungus.

Sad but interesting, too

What a fascinating spotting!

The breeze must have made it slip a little down the leaf-blade making you feel it really moved. If anybody can identify the beetle, it would be helpful.

Mark Ridgway, thanks a lot. It's really sad news for me. Is it possible to identify the beetle.

If that beetle was still moving it would be it's last.

Mariana, it was alive.

looks like a mushroom took over.. was it alive and moving?