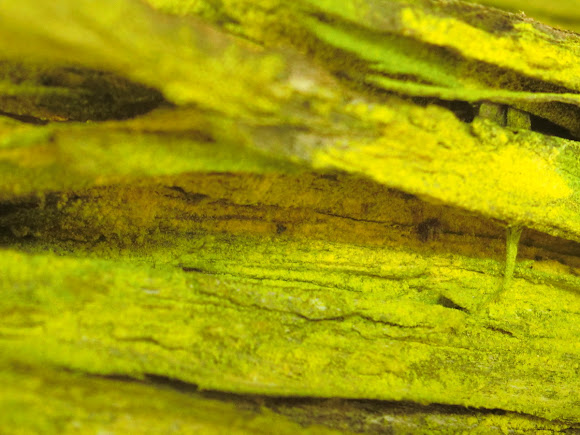 Walking through a forest of coastal ti-tree I noticed that, very occasionally, some trunks had what looked like iridescent glowing yellow paint sprayed on. As it was not possible that vandals had been there I took some shots hoping to get structural detail in the close-ups. Almost! It's possible to see tiny balls within the yellow. A microscope would have been great.

@Emma... I don't like mustard powder 'straight' but of course essential in Indian cooking as you would know. We had an amazing fungi season here. Great opportunity to learn about them but I'm not sure I should have started on it ! It's so complicated and vast.
You're right about the air quality indicator. I've read that a few times now. Seems to apply to the green ones in particular. Thanks again for the ID on this.

Looks like mustard powder. Do you eat mustard powder?
Wow yo have a huge collection of fungi!!
Lichen is supposed to indicate good quality until I found out today that orange lichen grows where Nitrogen content is high.