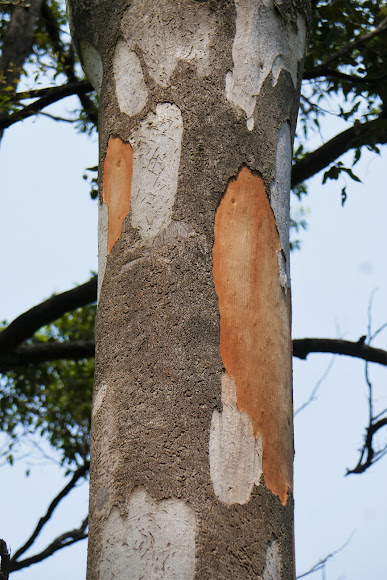 The "grey gums" are a group of six Eucalyptus species that can be recognised by their eye-catching bark, which is orange-coloured when freshly exposed. This spotting is of four different trees at various stages of shedding their bark, and shows the colour variations from creamy-yellow, orange and grey. They are medium-sized to tall trees that are endemic to eastern Australia. Grey gums are also a favourite koala food trees in Toohey Forest, and the last photo shows some claw marks made by koalas on the grey bark. This grey bark is also the easiest way for me to identify the tree as being one of the grey gum species. To make an exact ID for this spotting, I would need to see flowers and gumnuts (seed pods).

Toohey Forest is a remnant eucalyptus woodland reserve of approximately 655 hectares. The forest is situated within an urban area on the south side of Brisbane, within the city limits. Mt. Gravatt Conservation Reserve is just on the other side of the freeway, but forms part of the original remnant forest.

There are three Eucalyptus species with the common name "grey gum" that have been identified in Mt. Gravatt Conservation Reserve: small-fruited grey gum (E. propinqua), grey gum (E. major), and grey gum (E. bitturbinata). The first two are noted as being koala food trees, whereas the third is not, and thus not a likely contender for this spotting ID - https://megoutlook.files.wordpress.com/2... Another useful local tree guide - http://www.saveourwaterwaysnow.com.au/_d...