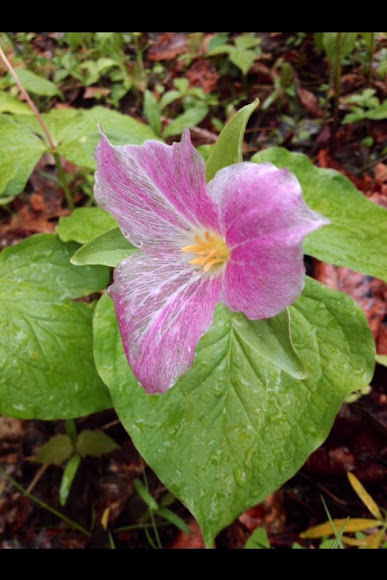 Trillium grandiflorum (common names white trillium, large-flowered trillium, great white trillium, white wake-robin, French trille blanc) is a species of flowering plant in the family Melanthiaceae. A monocotyledonous, herbaceous perennial, it is native to eastern North America, from northern Quebec to the southern parts of the United States through the Appalachian Mountains into northernmost Georgia and west to Minnesota. It also thrives on Vancouver Island in British Columbia. There are also several isolated populations, such as in Nova Scotia and Iowa. Trillium grandiflorum is most common in rich, mixed upland forests. It is easily recognised by its attractive three-petaled white flowers, opening from late spring to early summer, that rise above a whorl of three, leaf-like bracts. It is an example of a spring ephemeral, a plant whose life-cycle is synchronised with that of the deciduous woodland which it favours.

Growing on a creek-bank in my yard.

Note that this "white" Trillium is PINK! This is an aging flower. The petals are thinning & when plants are under stress, they often produce reddish-purple pigments called anthocyanins. These are the pigments that give the characteristic colour to red grapes, cabbages and beets under normal conditions.