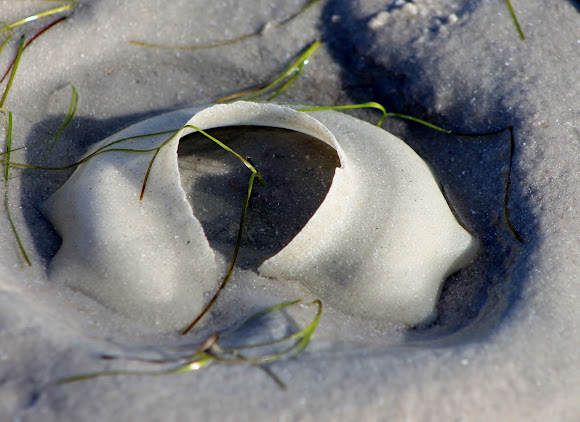 Moon snails are common visitors to sandy dives sites, where they may be observed moving along the bottom using millions of tiny cilia on the bottom of it's expansive foot. Ranging from Vancouver Island to Baja, California at depths from Intertidal to 600’, this voracious predator is the bane of oyster-growers and clam beds. Growing to a shell diameter of 5 1/2”, the moon snail generally feeds on mollusks such as clams and cockles by drilling a hole in the shell. Alternate methods involve suffocating its prey by wrapping them in that gigantic foot until they suffocate and die. Clam shells found with a perfectly round hole drilled in them were probably eaten by moon snails

The moon snail is typically found partially buried in the sand and along mud beaches. It can extend a fleshy foot to over 12 inches in diameter.

Moon snail egg cases, commonly called sand collars, appear to be thin pieces of rubber in the shape of a round collar. They are composed of snail eggs sandwiched between layers of mucus coated with sand. About half way through the summer, the eggs hatch and the collars fall apart. The free swimming snail larvae become part of the zooplankton in the ocean until they are ready to settle down and transform into little moon snails. These snails are edible, and some people do eat them, but they are not commercially harvested. The Lewis’ Moon Snail is the largest living moon shell. Its common and scientific names honor Meriwether Lewis, who with William Clark