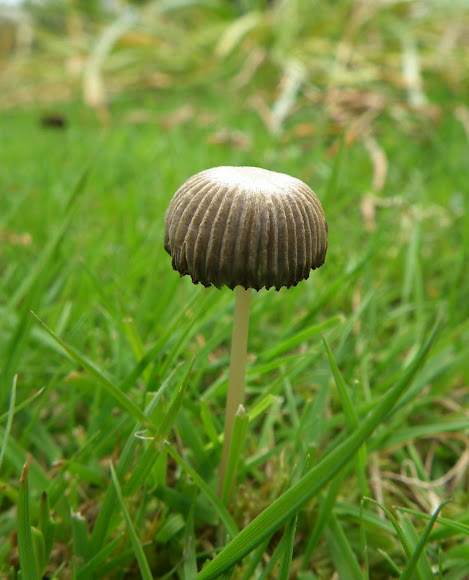 Also known as the Japanese Umbrella, this is a short-lived mushroom that appears after rainfall. It matures, spreads its spores and decays all within 24 hours, so by now there is probably no sign of these little mushrooms. It has this typical ribbed bell with the tawny "eye-spot" on the top. The gills go from white to grey to black, and unlike most inkcaps the bell flattens as it ages. It has been described as "edible but not worthwhile"! I think my photos are quite early in this mushroom's life.

Most commonly found in short grass, usually in meadows, but can appear on lawns and in parks too.

Found in an open grassy patch near the University of Essex lakes, after a day of heavy rainfall.

Someone on Twitter helped me ID this, it's a pleated inkcap, Coprinus plicatilis!

Thank you both! I hope I can get an ID for this little mushroom :)