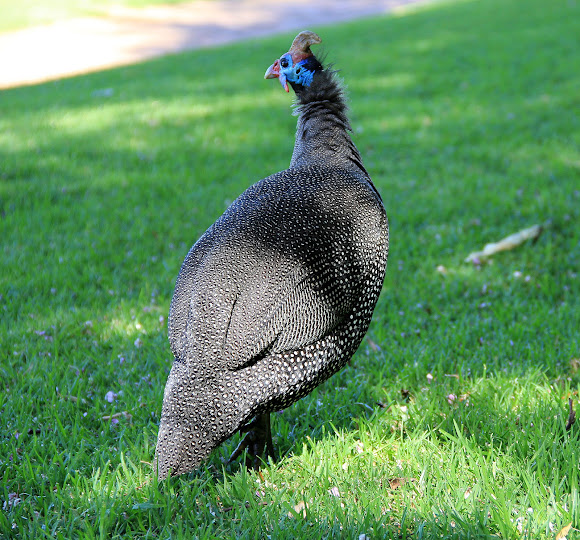 The helmeted guineafowl is a large (53–58 cm) bird with a round body and small head. They weigh about 1.3 kg. The body plumage is gray-black spangled with white. Like other guineafowl, this species has an unfeathered head, in this case decorated with a dull yellow or reddish bony knob, and red and blue patches of skin. The wings are short and rounded, and the tail is also short. Various sub-species are proposed, differences in appearance being mostly a large variation in shape, size and colour of the casque and facial wattles. (https://en.wikipedia.org/wiki/Helmeted_g...)

It breeds in warm, fairly dry and open habitats with scattered shrubs and trees such as savanna or farmland. Flocks of guineafowl have flourished in recent years in the Southern Suburbs of Cape Town, where they seem to have adapted remarkably well. The flocks move slowly along the quieter suburban roads, looking for food on the grassy 'pavements' and in gardens where the fence is low enough for some to enter without feeling separated from the flock. They often roost at night on the roofs of bungalows. While residents generally appreciate the local wildlife, it can be a nuisance, obstructing traffic and making a lot of noise in the early morning. Their success is probably due to the large but cautious flock - they can fend off cats, do not enter gardens with dogs, and are visible enough in the quiet roads in which they live to avoid being run over. Although many young guineafowl manage to fall down drains (and are left behind by the flock), it is not enough to restrain their numbers. Adult birds are sometimes caught and eaten by the homeless. (https://en.wikipedia.org/wiki/Helmeted_g...)