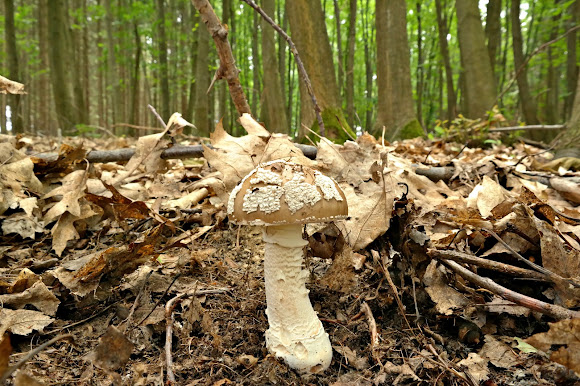 Cap: 8 - 15cm diameter; brown or grey-brown; usually retaining irregular grey patches or fragments of the universal veil, the cap of Amanita excelsa is initially domed, becoming almost flat or occasionally slightly concave at maturity. The velar patches are easily washed or wiped off the cap surface. Beneath the pellicle the flesh of the cap is white and firm. Gills: While most Amanita species have free gills, the gills of Amanita spissa are adnexed. They are white and crowded. Stem: The stem of Amanita excelsa var. spissa is 8 - 12cm long and 1.5 - 2.5cm in diameter; white and with a robust ring that is usually grooved on its upper surface. The stipe is smooth or lined above the ring; covered in white scales below. At the swollen base there is no clear volval gutter and the volva itself is no longer evident when the fruitbody reaches maturity.

Mycorhizal with hardwood and softwood trees, often most abundant near the edge of mixed woodland.

The specific epithet excelsa is a Latin adjective that translates to elevated or lofty, while spissa means dense or crowded - a reference to the closely-spaced gills of these fungi. Although the stem flesh of Amanita excelsa (both varieties) does not turn pink when cut or bruised as the Blusher Amanita rubescens does), some people refer to these mushrooms as the European False Blusher. In stature they have much more in common with Blushers than with Panthercaps, the origin of their former common name False Panthercap.)