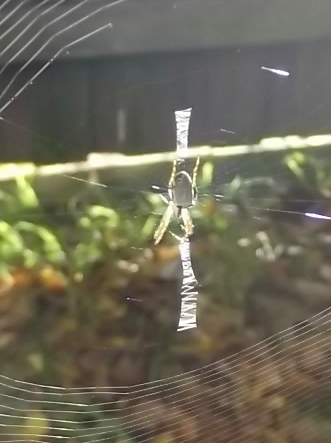 This species has a very variable pattern. http://lifeunseen.com/index2_item_3904.p...

Spiders decorate their webs to help them avoid predators - at the cost of catching less food. Many spiders adorn their webs with barely visible silky doodles called stabilimenta, made from the silk they use to wrap prey. These can be lines, crosses, disks or spirals - they often change design in each day's web. Species with decorated webs hunt during the day, and sit at the centre of their web. This has made researchers think that stabilimenta are a visual signal or decoy. But what the spider is signalling, and to whom, is mysterious. A scientist set up pairs of adjacent webs of the American orb-weaving spider Argiope aurantia and removed the decorations from half of them. Fancy webs caught about 30% fewer prey. http://www.nature.com/news/2002/020711/f...

Wow Martin.. nice to learn here that only Argiope Genus spiders are not Silver Orb weavers.... Thanks for sharing... This is most important spotting for me...!!
http://australianmuseum.net.au/image/W2
http://eol.org/pages/1194116/entries/333...

Yes Leanne it was this fascinating web that interested me. She must be ale to produce several types of silk.