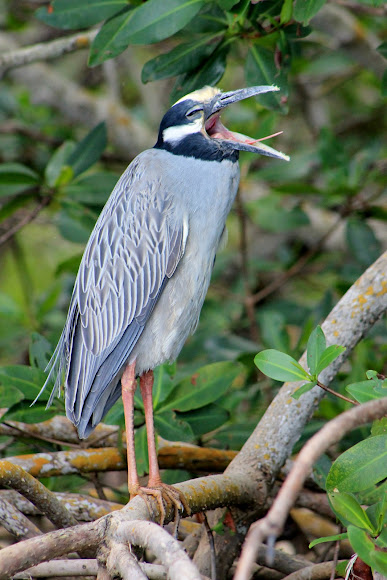 Adults are about 61 cm long and weigh 625 g. They have a white crown and back with the remainder of the body grayish, red eyes and short yellow legs. They have a white stripe below the eye. Juveniles resemble young Black-crowned Night-Herons, being mainly brown flecked with white or gray

The Yellow-crowned Night Heron (Nyctanassa violacea, formerly placed in the genus Nycticorax), also called the American Night Heron or squawk, is a fairly small heron, similar in appearance to the Black-crowned Night Heron. It is found throughout a large part of the Americas, especially (but not exclusively) in warmer coastal regions; an example occurrence is the Petenes mangroves of the Yucatan

Their breeding habitat is swamps and marshes from the eastern United States to north-eastern South America. They often nest in colonies, usually on platforms of sticks in trees or shrubs. They lay 3–5 pale blue-green eggs

yes, I did wake this guy up , while I was out kayaking, I spotted him and woke him up, didn't intend to, but got some good pic's of him
lol

Thank You, I loved watching this guy, but did feel bad for disturbing him from his sleep

Gee Nancy
I did upload about 5 pic's not sure why they didnt upload, it showed they had, same thing happened with the spoonbill, I will try again

poor guy was so sleepy, he was thankfully not disturbed by me much, I was out kayaking and spotted him

Love this. You might think about adding the pic you have of him with his eyes closed. (The community might better appreciate why they're called night herons--and together the photos make me laugh).