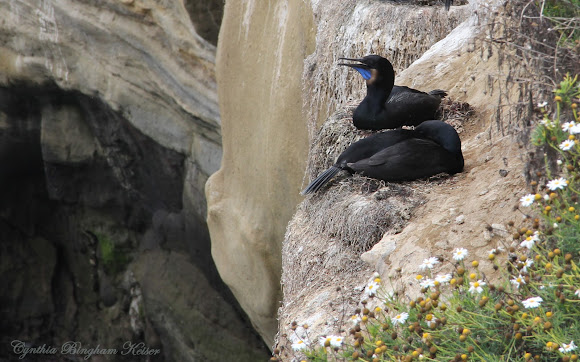 Black Cormorant with a blue throat-patch.

Sandstone cliffs on the coast. "Cormorants are colonial nesters, using trees, rocky islets, or cliffs. The eggs are a chalky-blue colour. There is usually one brood a year. It ranges, in the summer, from Alaska to the Gulf of California, but the population north of Vancouver Island migrates south during the winter" - Wikipedia

"It feeds on small fish from the surface to sea floor, obtaining them, like all cormorants, by pursuit diving using its feet for propulsion. Prey is often what is most common: in central California, rockfish from the genus Sebastes is the most commonly taken, but off British Columbia, it is Pacific Herring. Brandt's Cormorant have been observed foraging at depths of over 40 feet." - Wikipedia

Hi smutnee80, I didn't know about them either! Nature keeps amazing me :)

What beautiful birds i had no idea that this species existed, love the blue throat.

They are beautiful! This is my first time seeing them and didn't know they even existed. I love spottings like that! Perhaps some day you'll come out here on holiday. :)

Hi Dana and thank you for the ID. I agree with Brandt's!