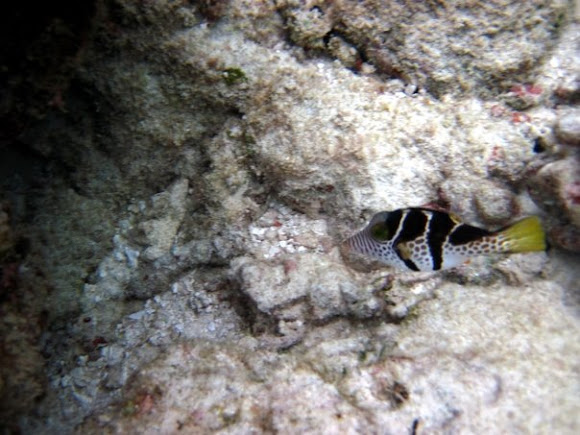 Valentinni's sharpnose puffer, Canthigaster valentini, is a pufferfish of the genus Canthigaster, and can be found in reefs throughout the Pacific Ocean and Indian Ocean. It reaches a maximum length of 11 cm. It is also referred to as a black saddled toby. It has four distinct black stripes (saddles) on its back. The head is blue-grey and the main body is white speckled with blue-grey spots. The tail and fins show hints of yellow and there is a rainbow streek of color behind the eyes. It feeds mainly on algae. Valentinni's sharpnose puffer is highly poisonous to eat. C. valentini are occasionally found in schools together with Paraluteres prionurus, a non-toxic filefish which has evolved to mimic the very toxic C. valentini for protection against predators.

We could confused it with Paraluteres prionurus (Mimic Filefish). The difference between the two species are the size of their dots. C. valentini has bigger brown dots.