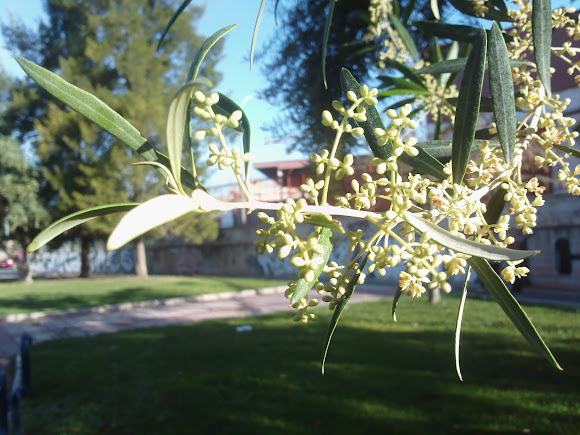 The olive tree, Olea europaea, is an evergreen tree or shrub native to the Mediterranean, Asia and Africa. It is short and squat, and rarely exceeds 8–15 metres (26–49 ft) in height. The silvery green leaves are oblong in shape, measuring 4–10 centimetres (1.6–3.9 in) long and 1–3 centimetres (0.39–1.2 in) wide. The trunk is typically gnarled and twisted. The small white, feathery flowers, with ten-cleft calyx and corolla, two stamens and bifid stigma, are borne generally on the previous year's wood, in racemes springing from the axils of the leaves. The fruit is a small drupe 1–2.5 centimetres (0.39–0.98 in) long, thinner-fleshed and smaller in wild plants than in orchard cultivars. Olives are harvested in the green to purple stage. Canned black olives may contain chemicals (usually ferrous sulfate) that turn them black artificially. Olea europaea contains a seed commonly referred to as a pit or a rock.

The olive tree, Olea europaea, has been cultivated for olive oil, fine wood, olive leaf, and the olive fruit. The earliest evidence for the domestication of olives comes from the Chalcolithic Period archaeological site of Teleilat Ghassul in what is today modern Jordan. Farmers in ancient times believed olive trees would not grow well if planted more than a short distance from the sea; Theophrastus gives 300 stadia (55.6 km/34.5 mi) as the limit. Modern experience does not always confirm this, and, though showing a preference for the coast, they have long been grown further inland in some areas with suitable climates, particularly in the southwestern Mediterranean (Iberia, northwest Africa) where winters are mild. Olive plantation in Andalucía, Spain Olives are now cultivated in many regions of the world with Mediterranean climates, such as South Africa, Chile, Peru, Australia, and California and in areas with temperate climates such as New Zealand, under irrigation in the Cuyo region in Argentina which has a desert climate. They are also grown in the Córdoba Province, Argentina, which has a temperate climate with rainy summers and dry winters (Cwa).[31] The climate in Argentina changes the external characteristics of the plant but the fruit keeps its original features.[32] The northernmost olive grove is placed in Anglesey, an island off the north west coast of Wales, in the United Kingdom[33]: but it is too early to say if the growing will be successful, since just 5 years have passed, and no news were found about it. Olives at a market in Toulon, France Considerable research supports the health-giving benefits of consuming olives, olive leaf and olive oil (see external links below for research results). Olive leaves are used in medicinal teas.