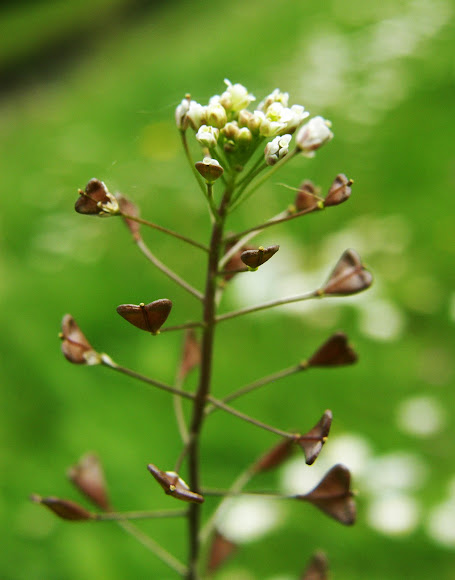 Known by its common name shepherd's-purse because of its triangular, purse-like pods, it is a small (up to 0.5m) annual and ruderal species, and a member of the Brassicaceae or mustard family. C. bursa-pastoris plants grow from a rosette of lobed leaves at the base. From the base emerges a stem about 0.2 to 0.5 meters tall, which bears a few pointed leaves which partly grasp the stem. The flowers are white and small, in loose racemes, and produce seed pods which are heart-shaped

It is native to eastern Europe and Asia minor but is naturalized and considered a common weed in many parts of the world, especially in colder climates, including Britain, where it is regarded as an archaeophyte, North America and China but also in the Mediterranean and North Africa.

It is commonly used as food in Shanghai and the surrounding Jiangnan region, where they are stir-fried with rice cakes and other ingredients or as part of the filling in wontons.