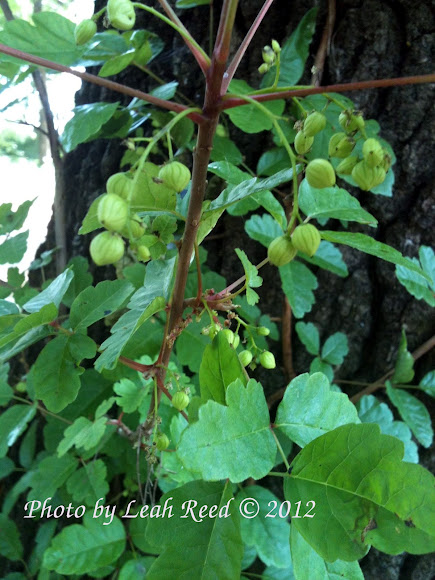 Poison oak is a widespread deciduous shrub throughout mountains and valleys of California, generally below 5,000 feet elevation. In shady canyons and riparian habitats it commonly grows as a climbing vine with aerial (adventitious) roots that adhere to the trunks of oaks and sycamores. Poison oak also forms dense thickets in chaparral and coastal sage scrub, particularly in central and northern California. It regenerates readily after disturbances such as fire and the clearing of land. Rocky Mountain poison oak (Toxicodendron rydbergii) occurs in canyons throughout the western United States and Canada. During late spring loose clusters (panicles) of small greenish-white flowers are produced in the leaf axils. Functional male and female flowers are typically produced on separate plants (dioecious), or occasionally, unisexual and bisexual flowers may occur on the same plant (polygamous). Male flowers contain five stamens and a rudimentary pistil surrounded by five cream-colored petals and five sepals. Female flowers have a fertile pistil (gynoecium) and reduced, sterile stamens. During summer and fall, female plants produce small clusters of ivory-white fruits, each with a papery outer exocarp, a soft waxy mesocarp and a hard stony endocarp surrounding the seed. The fruits of related shrubs such as squaw bush, lemonadeberry (Rhus integrifolia) and sugar bush (Rhus ovata) are reddish with a sticky-pubescent exocarp.

Western poison oak is often found in oak woodlands and Douglas-fir (Pseudotsuga) forests. Along the Avenue of the Giants in northern California, the vine form may be seen climbing many feet up the trunks of Coast Redwoods (Sequoia sempervirens). It can also be found in damp, shady areas near running water and out of direct sunlight. Any trail leading to a waterfall on California's coast will most likely be home to western poison oak.

The old adage about poison oak and poison ivy is quite accurate: "Leaves of three, let it be; berries white, poisonous sight." A poultice made from the resinous flowers and leaves of gum plant (Grindelia robusta) was commonly used by Indians and early settlers in California to relieve inflammation and itching.

OMG...your right moroccoExtra. I didn't even think poison oak produced berries. Thanks so much for helping me identify this XD

this is poison oak

No worries...thanks for the try XD

Nevermind..I didn't see the second photo...they are smaller than I thought

I could be completely wrong, but would those be figs? Not ripe yet of course.